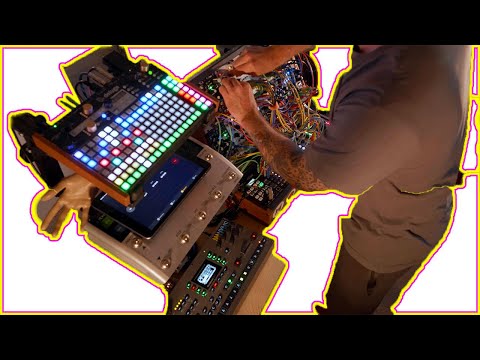 Deluge at the center, Octatrack for some live effects, and bleepy-bloopies from the modular. And of course, much talent standing behind the boxes.

Jeremy does a lot of playing live on the Deulge, sometimes one-offs, sometimes recording in loops, mostly basslines. He plays the eight audition keys like a short piano, and even pulls off that scrolling-up-and-down glissando trick. He's also got entire kits of 2-bar / 4-bar loops that he'll just dip into and run one or two of for ambience / rhythm in different sections. There's lots to crib here.

He always makes real music, but the other videos he's made with the Deluge, I've felt like he saw it as a hardware DAW / clip-launcher. In this vid, you get the feeling that he's really starting to get the D, and it's awesome. Even though it's sequenced, it's always evolving, and it's live in a way that just unmuting tracks in Ableton Live isn't.

There's a great bit where he bashes in a one-note rhythmic bassline with the audition pad, and then tosses in some octaves here and there on the grid. That's the kind of thing that I love most about the Deluge -- the kind of live sequencing thing. Play a couple lines, record one, tweak in real time, carry on. The sequence as part of the performance.

I want to see him "get" the iso keyboard. The audition pads are nice and all, but there's only eight of them, and you know he's got bigger musical ideas. That'll be killer.

(He also gets great mileage out of the Octatrack's two-scene crossfader and heavy/light drum patterns, but I don't really understand that device, and that's for another forum.)

Anyway, great show that really underlines the "Performance Sequencer" side of the D.